Mike has spent his career as a leader in developing the solar and renewable energy sector in the United States and abroad, serving as Assistant Secretary of Energy under Bush Senior and running one of America’s largest solar companies.  He was President of the US Solar Energy Industry Association and Hydrogen Association.  Mike has always enjoyed discovery and innovation serving as Associate Laboratory Director For Energy And Environment at Department of Energy’s Pacific Northwest National Laboratory and as CEO for China’s National Institute For Clean And Low Carbon Energy.  In retirement Mike runs HiBar Ranch and is continually taking more farm infrastructure off the grid and running it on alternative energy.  He spends most of his time working in the woods and milling custom lumber on his log mill. 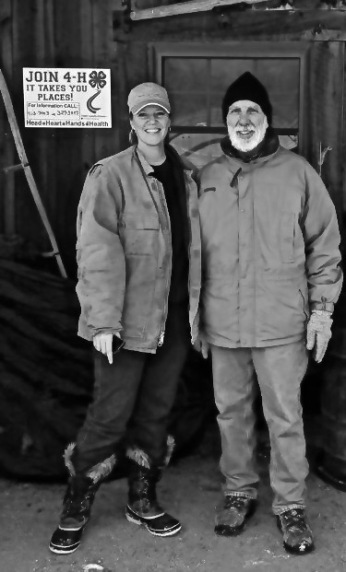 Lori has been running an organic farm for ten years and is also a free lance journalist/photographer.  Lori’s background started in media where she was one of a handful of people to launch Marketplace on NPR at KLON Radio studios in Long Beach California.  She went on to become a television reporter and producer in Los Angeles and Portland markets.  Lori later formed and headed a  global “go-to-market” consulting company with emphasis in the energy technology sector.  Her private company offered adjunct Chief Marketing Officer functionality for technology companies looking to rapidly excel toward global dominance in emerging vertical and geographic markets.  With an appreciation for the technology world, Lori also appreciates the antithesis of technology and the pre-requisite for peace being grounded in nature.  It was from Lori’s 24/7-always on a plane-lifestyle, deeply entrenched in the global tech sector, that drove Lori to pursue a much slower “counter-culture” lifestyle that was centered on “balance” for her family through nature, farm life and doing things by hand.  Lori manages all the livestock and food production on the farm with her interests being natural medicinals, holistic foods and organic wellness products such as soaps, salves, teas and a home dairy and writes on homesteading and farm life when time permits.  When she’s writing it’s usually poetry about life on the farm.

Our Farm Mission ~ To Create Beauty & Meaning Through Homesteading

Where the spirit does not work with the hand, there is no art. Leonardo da Vinci

The power of nature is such that it’s what all art strives to be. The more we can get in tune with the harmony of the planet, the more our art can benefit from that relationship. Rick Rubin